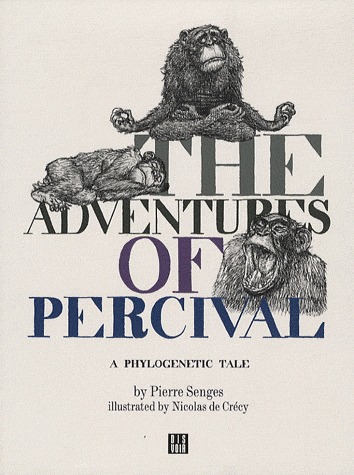 The adventures of Percival

We all know the tale of the ape sitting for all eternity at the typewriter hoping to compose, through sheer chance, a comedy by Shakespeare.
This fable is used tu give the idea of the improbabilily of things, like the emergence of intelligence in primates. But there's a slight hitch:to accept that story assumes one imagines the ape as a pure immortal mechanism coupled to another machine made out of keys and an ink ribbon.That amounts to denying him any intelligence, any artistic sensitivity, or even the slightest embryonic common sense.
What would happen if, instead of an imaginary chimpanzee, one invited a real chimpanzee, equipped with a real cortex and a no less authentic conscience, to sit at the tvpewriter ? That's the experiment undertaken by Samuel Mclntosh, gardener, nrathematician, Doctor in Probability and Animal Behaviour. Will Percival, formerly the typist ape end by writing Shakespeare's Works ? Will he type away blindly, or will he pervert chance by letting his genius express itself ? Will he obey his destiny as metaphorical animal or will he take a malicious pleasure in deceiving the prédictions of the ethologists ? Will Samuel Mclntosh successfully complete his experiment ? Reading these pages should help yon answer those questions.
However, nothing is less certain: several versions of the same fable exist, and they don't always agree. This book draws inspiration front the works of Dominique Lestel, a philosopher-ethologist, and Alain Richert, a landscaper-botanist. It takes into account (as it pleases) the most récent speculations as far as ethology is concerned, and twists the use of ethograms (description of behaviours) in order to find other ways of telling fables.
Nicolas de Crécy's drawings are there to bring a bit of scientific rigour to the fantasy, and vice-versa.