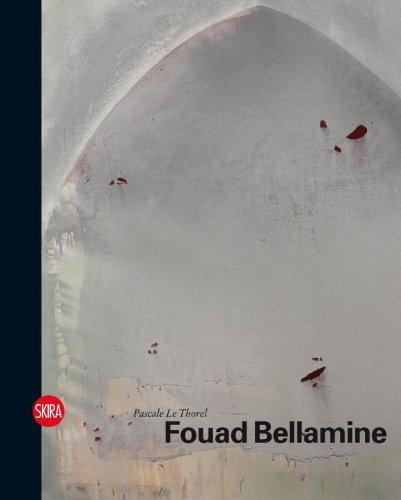 150 works - mostly unpublished before - signed by the Moroccan contemporary artist Fouad Bellamine in a rich, complete monograph. Moroccan contemporary artist, Fouad Bellamine, was born in Fez in 1950 and was raised amidst varied artistic and creative influences in the Medina of his home town. Bellamine came from a family of skilled craftsmen, and he learned many of his painting techniques from his father who was a talented artist. Pursuing his passion for art, from 1967 Fouad Bellamine studied at the School of Applied Arts in Casablanca, going on to the University of Paris where he completed a Masters degree in the History and Theory of Art. He later became a Professor of History and Art at the University of Rabat. His first exhibition in 1972 in Rabat featured a selection of his abstract landscapes, which were well received by critics. Throughout the 1970s Bellamine explored the use of different materials in art and it is during this experimental period that he developed his unique style of minimalism with bold single-colour brush strokes which is still evident in his current work. He has been exhibiting extensively throughout Morocco, France, Belgium and the U.K. as well as worldwide such as in Spain, Portugal, Finland, the Middle East and Egypt, Senegal, California, Tunis. In 1987, he participated to the Biennale of São Paulo in Brazil. Since he had returned to Morocco in 1989, Bellamine contributed actively to the promotion of contemporary art in his country. In 1997, he initiated the creation of a permanent collection of contemporary art in the Children's Hospital of Rabat, first experience of its kind in Morocco. His works have been acquired by several public and corporate collections such as Moroccan institutions as well as the Museum of the Arab World Institution (IMA), the National Fund for Contemporary Art (FNAC), the Museum of Modern Art, the Museum of Africa and Oceania all of them in Paris, the Kinda Foundation. He lives and works in Rabat.